You might want to make a cup of tea – I’ve got lots to talk about this week! First of all it’s been very exciting to be approached by Boden. Lots of you have been commenting on their growing relationship with bloggers and how they seem to have been focusing on the younger 20-somethings who, realistically, have never been their core audience. There have been  a few threads discussing it on Mumsnet with women noting that whereas most brands are making a move towards embracing the older woman, Boden seem to be travelling in the other direction. I must admit I’ve been wondering about that too, although this has been my most successful Boden season for 2 years, I’ve spent a lot with them. When I look at my account over the previous 3 seasons I can see that I returned over 75% of everything I ordered but not this time. Maybe it’s because I’ve started my new job and they do formal so well, but then again, my discovery of things like their super skinny jeans has seen me buying casual too.

Anyway, as I’ve mentioned before, because I work I don’t need to run my blog as a business. This gives me the freedom to say no to most brands that approach me and the results of the survey I did told me that you liked this approach.  (At this point I must say that I don’t think there’s anything wrong with women earning money from their blog, it takes a lot of time and effort and I applaud every single person who manages to make a living out of it). But my survey led me to decide to work mostly with small brands, preferably British, so that I can help them grow and offer some diversity away from the high street. I also decided that if I was approached by any of your 5 favourite brands I would work with them too, if only to build a pathway for the over 40s woman to be heard by them. Needless to say, Boden is one of your top 5, so when they asked me to choose something from the Summer range for about £100 I was (very) happy to do it. Annoyingly for me, I’d already bought the things I needed but that gave me the freedom to look for something a bit different.

So, I went round and round the site thinking about dresses but I’ve bought all the plain ones and I don’t do pattern. I looked at the trousers but the range is very small at the moment. I really  like the look of the Lilians but I veer away from linen – after the long drive I have I’d look like an old paper bag when I got to work. Then I stood back and thought about all the books on style I’ve read over the last couple of years and how they all put the focus of the outfit on the accessories, in particular the shoes.

I didn’t want to take the obvious route and choose something like the Alice or Erin heels (although I love them I haven’t bought them because they’re just so distinctively Boden – there lies a true conundrum for a leading brand!). Then I spotted the Eva heels in a beautiful lavender grey. This is a colour that’s coming through in a big way for next summer so Boden are way ahead with this one. It’s a neutral but a move on from the ubiquitous tan and it looks really good with navy which means these sandals work really well for work but they also look great with jeans. Here they are as I wore them last Friday to meet a friend for coffee: The suede is butter soft and I find I can wear them all day at work without my feet being uncomfortable because they cover the whole foot in a supportive way. So, thank you Boden for my lovely sandals but most of all for recognising Midlifechic and the over 40 woman – may this be the start of some great dialogue.

Whilst we’re on the subject (and with lots of daily discounts flying around) I thought I’d recap on the most successful pieces I’ve bought from Boden’s SS15 range. which I also have in red 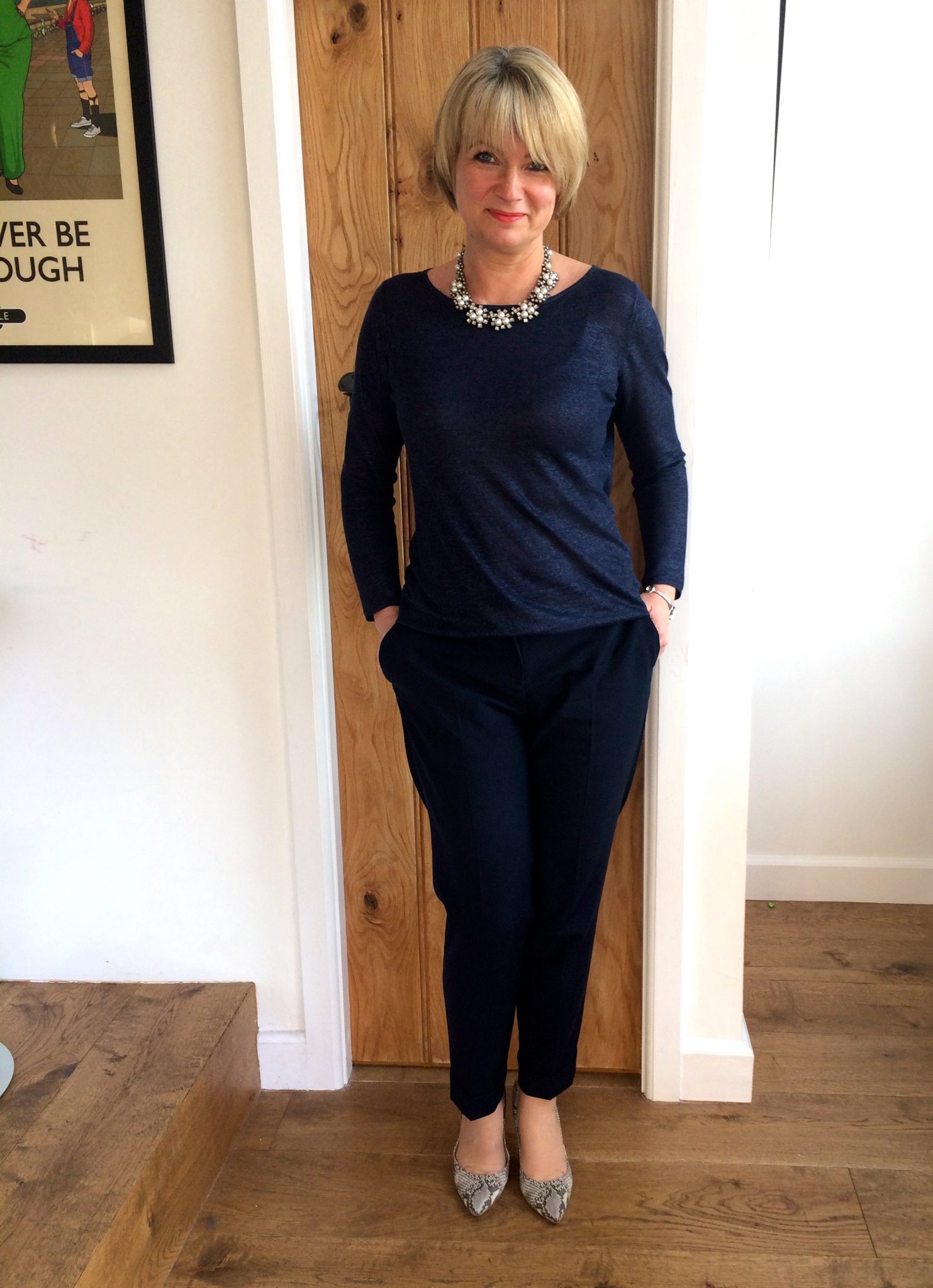 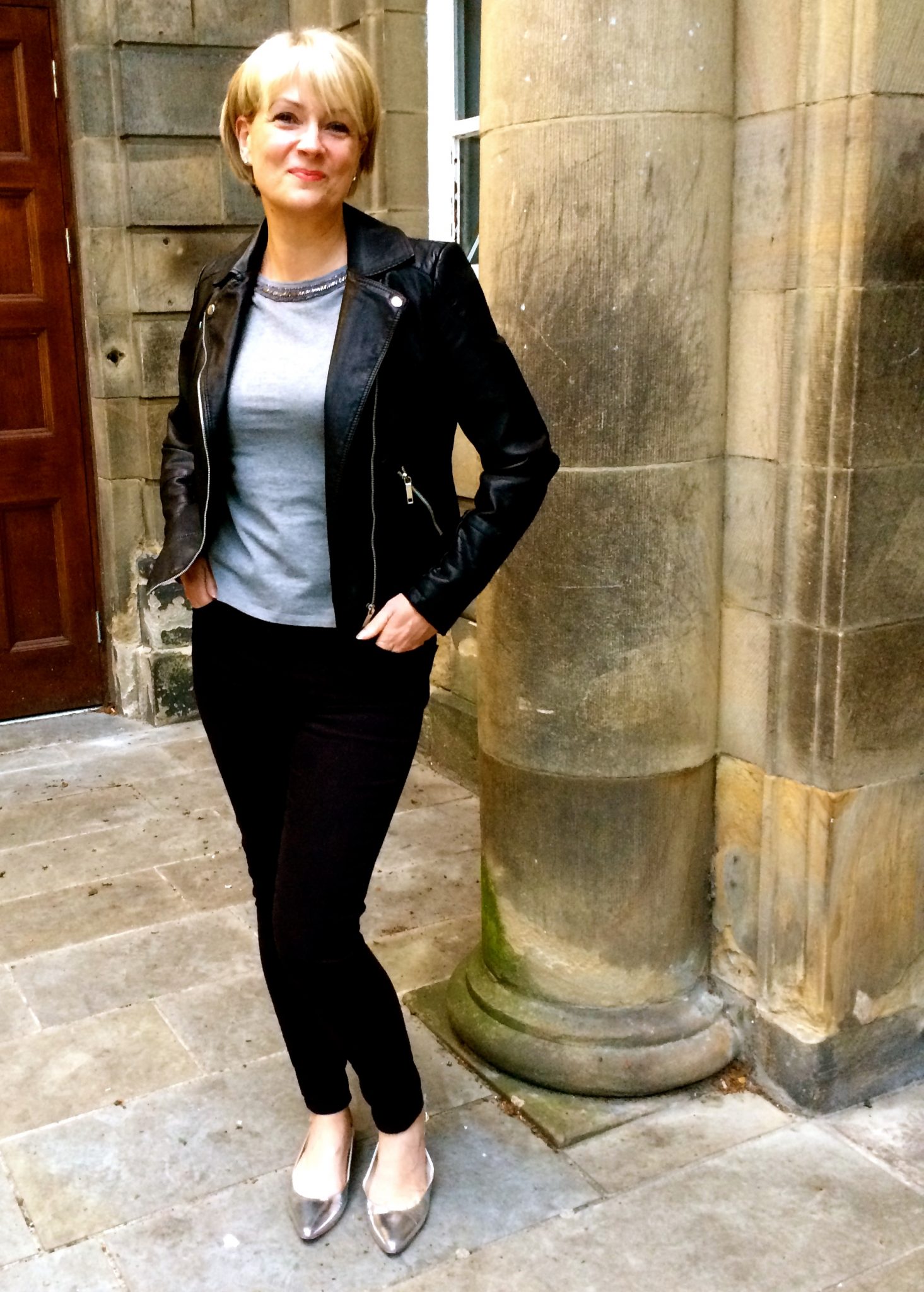 and finally the Ravello top which I haven’t tried before and I now love. So, there we have it. This week I reached the halfway point of the 6 month probation period in my new job which is the timeframe that the company gives for each side to decide if things are working out. This means I’ve been feeling quite reflective. As you know, at the start of the year I had no intention of making any big changes to my life and yet by the end of January I’d been offered this exciting challenge and couldn’t resist taking it up. Lots of you keep asking me whether it’s working out and the honest answer is that I don’t know yet.

The job in itself is endlessly fascinating so it’s definitely giving me lots of mental stimulation, the company is great and the people are lovely. But – the price is high from a personal and family perspective in lots of ways. Personally – I lose 8 hours a week driving which I’m still finding it hard to come to terms with, the driving also exacerbates my shoulder pain which is an ongoing thing. I don’t have time to go to the gym and I can see all the muscle definition that I worked so hard for just turning to flab.  I don’t have time to catch up with my friends or to look after my blog and respond to your comments and emails in a decent timeframe.

From a family point of view we’re descending into chaos. The novelty of domestic dad has definitely worn off for Mr MC – he still does far more than his fair share but I often come home to 3 hungry chimps baying for food and then have to launch into the nightly chaos of exam revision and homework. I know they could cook for themselves but if they did we’d never sit down together and the weeks would fly by without any conversation. The smallest has been poorly this week but I’ve been trying to limp him into school just to make it through to the weekend. Of course this meant that he was really sick by Wednesday night, spiking a temperature of 105 and vomiting right through the night. It was so hard to go to work yesterday not only because I was shattered but because he wanted me to stay. Luckily Mr MC was able to work from home but when they’re poorly they want their mums.

The eldest has been living through A-Level hell and I’ve always worked from home during these periods before so that I could keep him going with pep talks, healthy food and chats. It tugged at my heart strings last week when he said he’d tried to recreate one of he lunches I do but it just wasn’t the same. These are times that I’ll never be able to replace. I also really miss working with my husband – we’ve been a creative team since we met at Selfridges 19 years ago. I’ve always done my best work in tandem with him so it doesn’t feel as though my output is as good as it should be.

I met up with two of my friends who are career girls and have children the same age as me for a couple of glasses of wine last night. One is a high flyer in banking, the other was high up in the corporate world but is now a SAHM. Did either of them feel they’d got it right? Not really – in the end we decided that it’s always going to be a compromise. I’m reading Arianna Huffington’s book (she of the Huffington Post) at the moment. I’m finding it really helpful, it’s called Thrive and she points out that women of our age shouldn’t be focusing purely on what job we want to do, we should think about what life we want. Once we’ve decided on that we can work backwards and see if the job fits. So I’ll leave you with that thought and a couple of other outfits of the week. And last night for going to catch up with my friends Tonight – we’re off out to a lovely bistro with a group of friends we haven’t seen for ages so I must rush off to get changed. Have a good week everyone. Let me know your thoughts about Boden – they’ll see this post so if you want to speak to them this is your chance. Also if you have solved the work life balance issue (or even if you haven’t) I really value your input so please let me know and I promise to try to respond a bit quicker this week. Keep in touch.

(Disclosure: the shoes were a gift from Boden but all other clothes were bought by me. I haven’t been paid or compensated in any other way for this post and all opinions are my own).