Transitional chic – outfits of the day for Midlifechic

I know I promised you a piece on the New Season colour palette but up North, at least, the weather has been too nice to think about Autumn so although it’s nearly ready, I refuse to publish it until September (which is, after all, next week). So it’s a quick round up of my week in ‘transitional chic’ outfits I’m afraid. It’s been a ‘half woman half biscuit’ week – I’ve been  juggling the boys and work in a big messy muddle.

Added to the usual level of chaos was the fact that the younger two had birthdays while we were away so felt it necessary to celebrate (again) on their return. This meant that the house was full of boys ‘hanging out’ in all their prepubescent and adolescent glory, expecting a perpetual flow of crisps, snacks, drinks and birthday cake whilst they grunted and shouted at the Xbox or guffawed at movies that (if I judge them by the level of delirium) were probably the ones that I usually ban for being inappropriate. Anyway after 2 nights of sleeping over, they departed and the relevant mothers were apologised to – just in case. The house has been ‘defugged’ and we’re back on track. So – those outfits (I’ve added links where items are current stock):

For going to the specialist rugby injury unit in Cheshire with the eldest to check on the progress of the huge op he had in January this year. A friend who is a consultant always says you need to be smart for an appointment with surgeons, apparently (subconsciously) they take you more seriously and give you more information. For the first batch of boys arriving I wore this new purchase from TK Maxx. It became my mantra (through gritted teeth) for the duration of the invasion. 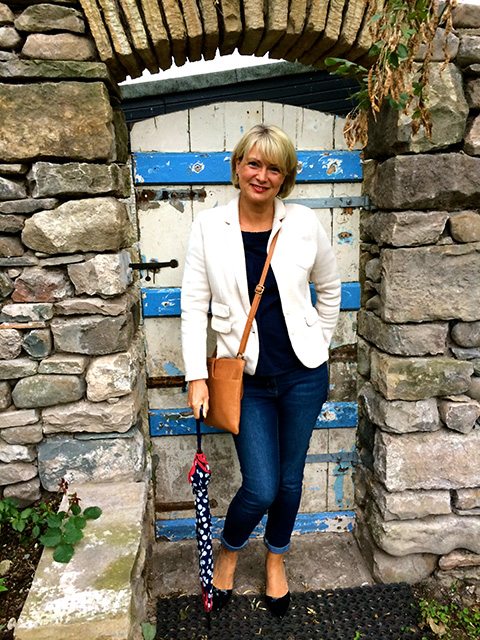 To reintroduce some daylight back into the boys’ lives we’ve been for a couple of walks. The woods are groaning with blackberries, damsons, sloes and hazel nuts so we’ve come back with bags full of foraged produce; Forget jam – sloe gin and blackberry vodka are now brewing nicely for Christmas (I’m just praying that the lids don’t blow off the recycling boxes full of empty gin and vodka bottles on Tuesday – knowing my luck it’ll happen just when the sleepover mums are walking past): Gary, our dog, has finally come back from his holidays on a cousin’s farm, it’s so lovely to have him home. For a spontaneous fish and chip supper on the playing fields: So, I’m glad it’s Friday although…although…that was the last week of the school holidays. We’ve realised that owing to the late breaking up of primary school, a week has been lost – never before have we known a 5 week summer holiday, it’s not fair. This weekend is the first of the university open days that we will now be attending in a panic because the 17 year old has been in total denial and ignored them all in June. So – university chic, here we come. Have a great weekend everyone, don’t forget to keep in touch.